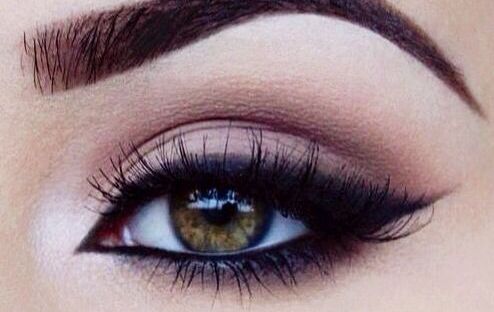 It’s incredible how one item of makeup can help me go from a potato to a passable human being within the space of five minutes. That item is of course liquid eyeliner: a product which may seem intimidating at first, but once you get used to applying it, becomes a staple of your makeup bag very quickly. Eyeliner is a fashion trend that transcends any specific time period – from the 1920s onwards people used eyeliner to accentuate their eyes. That’s not it’s only use though, in wartime Britain women used eyeliner to paint a black line down the back of their legs to give the impression that they were wearing stockings! Eyeliner was popularised by the likes of Audrey Hepburn and Marilyn Monroe in the 1950s, and continued to be used by Twiggy and Jane Birkin in the 1960s. Eyeliner is often associated with the 70s because it was worn by Siouxsie Sioux, David Bowie and Debbie Harry. Since then it’s been worn by male and female musicians alike – from Amy Winehouse’s trademark flicks, to Adam Lambert’s smoky-eyed look, musicians can never wear too much eyeliner.

Liquid eyeliner is incredibly versatile, and if you’ve got a steady hand then you can experiment with a variety of styles – thick lines, thin lines, winged, dual flicks, cat eyes, smoky eyes… If you’re feeling fancy you could even try coloured liquid eyeliner over the top of your usual black (once it’s dried, of course). Barry M’s blue, silver and gold liquid eyeliners are really good for this because they’re fast drying and don’t crumble or flake, remaining put until you take your makeup off at the end of the night.

Eyeliner comes in a multitude of forms, the most obvious being an eyeliner pencil. Eyeliner pencils come in a variety of colours and can be easier to manipulate than other brush-based liquid eyeliners. Pencils are very good for lining your lower lash-line, especially. However, constantly having to sharpen the pencils can be a bit irritating, which is why I tend to favour liquid eyeliner. My favourite product is cheap but has served me extremely well over the years, and I’ve found myself sticking by it despite having invested in more expensive alternatives. I tend to use Natural Collection’s black liquid eyeliner – which is a steal at only £1.99 from Boots!

Liquid eyeliner isn’t the most co-operative of products, though. That’s probably why there are so many alternatives, and there’s bound to be a form of eyeliner out there suited to you. Firstly, there are liquid eyeliner pens, which look like felt tips but are suitable for drawing on your skin. Often they have two ends, one with a thick nib and one with a thinner one. I like Maybelline Master Precise Liquid Eyeliner because it has quite a vibrant black colour, but I would advise you to stay away from Rimmel London ‘Scandaleyes’ because this runs out extremely quickly, often smudges after application, and several times the nib of the pen has split. Of course there are more expensive options available – such as Smashbox Limitless Waterproof Liquid Liner pen, but as a student on a budget I tend to find that cheaper alternatives are the way to go. I would recommend pens to anyone who doesn’t have much confidence in their ability to manipulate a paintbrush – if you sucked at art at school, then maybe eyeliner pens would work best for you. Others might find it easier to apply gel eyeliner with a brush – L’Oréal Paris Super Liner Gel Eyeliner is a long-lasting, high quality product which works especially well in combination with eyeshadow to create a smoky-eyed look, as you can use the brush to blend the eyeliner into the eyeshadow.

If you’ve got a steady hand then you might be lucky enough to get perfectly winged eyeliner on the first attempt, but when you’re hungover or shaking from caffeine withdrawal you might not be quite so lucky. Applying eyeliner is hard – I mean, it essentially painting on your face, and not all of us are Picasso. There are tricks to get around this fact, though. Some women use cellotape under each eye, apply eyeliner, remove the tape and then have a perfectly straight line. Ripping tape off your face is certainly one way to wake yourself up, but my preferred method is to apply eyeliner and then use a makeup wipe to shape the line to the right thickness, whilst also ensuring the flicks are the same angle and length on each eye. Just remember that your eyes are sensitive, don’t scrub too hard if you get it wrong on the first attempt.