Sex is the reason I’m sat here writing this.

Whilst thinking about your own conception unfortunately means coming round to the idea of your parents doing it, it’s the cold hard fact of the matter for the majority of the population. (It’s worth remembering that as a result of processes such as IVF, sexual intercourse isn’t the way everyone came into being).

Whilst sex is a fact of nature, it is a concept that means different things to different people. Various cultures and religions have differing attitudes, and indeed in some cases, punishments for engaging in sexual relations with the wrong people. To some, sex is a loving act; to others, sex is a source of income. For the purpose of this discussion, I am focusing on societal attitudes to sex as an action rather than as an industry.

Whilst embarking on a 5000 word essay titled ‘How are changing attitudes to sexual morality exemplified in literature from the 19th century to present day?’ I realised I needed some primary data in order to understand “attitudes to sexual morality” in the present day. Whilst I still intend to use the data included in this essay in the above project, I thought what I found was worthy of discussion in its own right.

I put a questionnaire of 10 questions to the audience of Twitter. Using this platform meant that I have no information about the demographic of the 1143 respondents: how old they are, what religion they class themselves as etc. This is an error of judgement on my part and means I can only discuss modern “attitudes to sexual morality” in a general way. The following conclusions about the data are merely speculative.

Only 26 people (that’s 2.27%) of 1143 respondents think you should only have sex if you’re married.This probably reflects the demographic of my Twitter following more than anything else; my followers are generally of a similar age to myself. This suggests that the majority of young people are moving away from the idea of sex as a sacred act between a married couple; a fact supported by the fact 732 out of 1143 respondents (64%) have already had sex.

Perhaps more of my followers are secular, and don’t feel morally obligated to wait until marriage to have sex. Without further information about the demographic of the respondents, it is impossible to determine what impact faith has on beliefs. However, it can be asserted that marriage is less necessary than it once was; thousands of couples now live together without feeling pressure to tie the knot. Perhaps as a result of their own familial circumstances, individuals do not perceive marriage as a necessary factor in conjugal relations. This article from The Telegraph suggests that only one in four couples who move in together see it as a step closer to being married. And let’s be honest, the three couples who aren’t fussed about getting married aren’t going to be sleeping in separate rooms, are they.

The responses to the questions about homosexual relations were unsurprising; a small minority agreed that sex should only be between a man and a woman, and a similarly small proportion disagreed that homosexuals should have equal rights to heterosexual couples. This suggests to me that the majority of my Twitter demographic is either secular, or have a liberal attitude to their religious doctrine. This is consolidated by the question about abortion; only 2.71% of the respondents thought that abortion was always wrong. 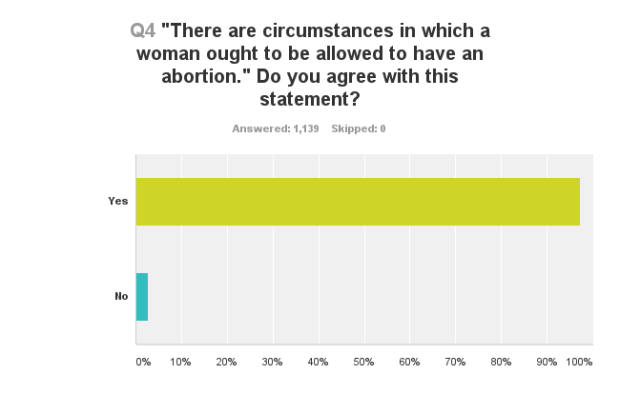 The statement about virginity divided opinions: 541 people (that’s 47.33%) out of 1143 respondents think that virginity is a social construct & doesn’t exist. Perhaps another pertinent question would have been “who you lose your virginity to is important – true or false?” Whether virginity exists or not is really rather irrelevant; whether people consider its importance in their own sexual journeys is far more so.

I know I personally believe greater sexual freedom is positive rather than negative. I don’t think if you gave people more freedom they would overindulge; a possible counter argument is that people who choose to keep sex “special” would be stigmatised rather than those who have lots of sex (think about what the word “slut” or “whore” mean to you). I don’t think that’s the case at all, I think greater sexual freedom would see more individuals practising safe sex. If it’s not taboo then there would be greater access to contraception, which is a particular issue for young people who engage in sexual relations contrary to the beliefs or wishes of their parents. 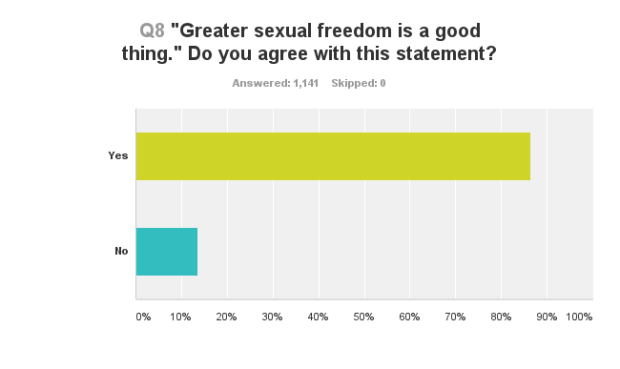 However the most interesting aspect of the data I collected was people changing their answers according to how the question was worded. When asked if they agreed/disagreed with the statement “It doesn’t matter how many sexual partners you have”, 747 people (that’s 65.35%) out of 1143 respondents said they agreed. But then only 568 people (49.69%) maintained “there is no such thing as too many sexual partners” when asked “How many sexual partners is “too many”?” This suggests that as a general rule of thumb, it wouldn’t matter how many people someone has slept with. For most people, they can understand that the past is the past. Relationships don’t work out. People make drunken mistakes, and so on.

However, when faced with a numerical value of past partners, it seems clear the individual evidently has has differing limits. 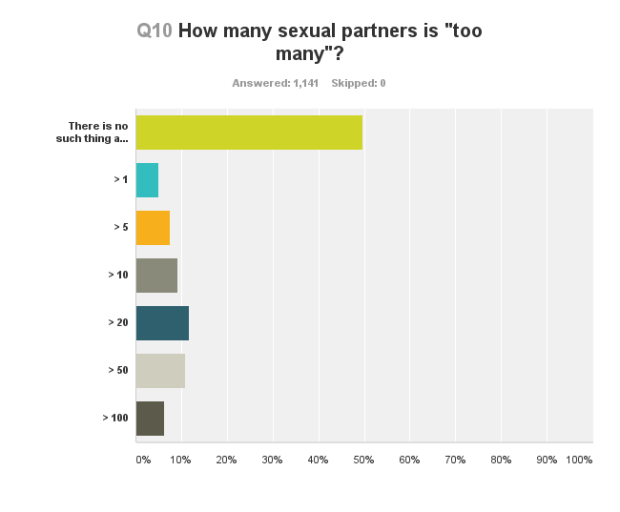 Yet the majority did maintain that there is no such thing as “too many”. This is perhaps because the situation is hypothetical, and the individual taking the survey is not faced with a very real issue of pursuing physical involvement with someone who has >100 sexual partners.

This is a problem that extends to many subjective questions: opinions change depending on circumstance. For instance, how many people would maintain their anti-abortion stance if they themselves became pregnant as a result of rape? We have no ethical way of knowing, or finding out.

Furthermore, when 411 of the respondents haven’t yet had sex, how can we expect their opinions to remain concrete? We can’t. This data needs to be taken with a pinch of salt because it is flawed. Interesting, certainly. But flawed.